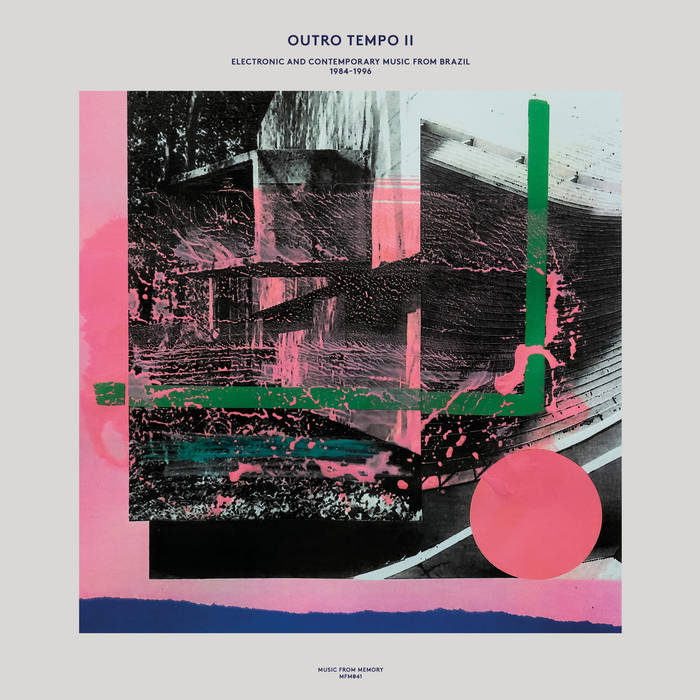 It’s raining heavily in São Paulo and the evening has the buzz of people rushing with excited anticipation. An audience of young Brazilians assembles in the fabled Teatro Oficina as musicians from Outro Tempo get ready to perform together for the first time. Backstage, I’m chatting to Mauricio Pereira from Os Mulheres Negras, who says to me: “você é louco… nobody in Brazil could have thought of bringing these musicians together. We all knew each other but belonged to different tribes.” The intimacy of the setting brings into sharp focus just how much of an outsider I am to the history of this music and place. The concert is set to start and I take my seat, wondering about the privileges afforded by my foreign ear.

This compilation takes another dive into the depths of the Brazilian underworld. It brings together music that was made in Brazil in the late 1980s and 1990s but this time rides a different current, drifting away from the rainforest and into the pulsating heart of Brazil’s immense and overpowering cities. There is still a pull towards the environment: in the music of Priscilla Ermel and Jorge Mello, where we can hear the acoustic turning on the technological in songs resonating with nature’s echo. And in Tetê Espíndola and Nelson Angelo’s sculptural sounds, which bubble with a harmony so fluid that it hovers between liquid and matter. Yet it feels most at home in the raw and ardent cities that became hubs for sonic invention for artists like May East and Akira S. Once more, it moves with freedom between different tribes, guided by an intuition that the musicians that come to the surface collectively laid the foundations for a new golden era of Brazilian popular music that would arrive as the world tuned in to the sounds of global electronica.

In the mid 1980s, Brazilian popular music was languishing. Politically, the relaxation of authoritarian rule had seen the shadow of the dictatorship finally lose its hold on Brazilian society. With this, MPB (Música Popular Brasileira) lost its ability to articulate the social consciousness of the era. The music that had once been a vital voice of dissent became the polite face of the new democratic establishment. Bored by innocuous music and frustrated with the mythical status of venerated stars, young musicians from the urban middle classes turned their back on MPB and looked to kickstart a new phase in Brazilian popular music.

The return to civil society set in motion an effervescent period of cultural production. Artists who had come of age during the last years of the dictatorship found themselves reorientating around a newfound sense of permission. This was a critically and culturally informed generation that was eager to rethink the idea of the MPB and move it into unfamiliar territories: alternative performance spaces, DIY modes of production, and collaborations with the art world.

The arrival of independent art scenes in Brazil’s sprawling cities imbued music with new significance. Live shows were commonly hosted at galleries, where groups like electronic duo Dequinha e Zaba explored links with performance art. The polyphony and verbal montage in “Preposições” inject the music with the language of experimental poetry. Meanwhile, Fausto Fawcett used the scaffolding of video-art to support conceptual albums. The mechanical Império dos Sentidos draws inspiration from post-modern tropes to illustrate a vision of a technocratic world order that shimmers like a hologram.

São Paulo provided the ideal backdrop for this wave of creativity to flourish. In this megalopolis, trees, animals, and fruits of all colours share the space with overpasses, street vendors, and cars. Behind the hard edges of its incessant high rises lies an unusual city in which the coexistence of nature and asphalt leads to different realities. An experimental sensibility grew out of its nightclubs, theatres, and universities, which thrived with transgressive vitality. Vibrant post-punk and new wave scenes blossomed, but the city’s sound reached beyond, shuffling promiscuously between pop and avant-garde forms. São Paulo’s music reflected the thrumming energy of the city. Always in flux, it cut together synth-pop, ambient, art rock, and electronic fusion into strange and beguiling forms.

In 1987, R. H. Jackson returned to São Paulo from New York with a 16 channel Tascam mixer and the cultural cachet of coming from New York’s subterranean music scenes. He set up a studio offering affordable mixing for alternative bands. Without support from mainstream labels or media, artists chose to release music autonomously or with independent labels like the influential Baratos Afins. Music was made intuitively using cheap technical equipment, improvising solutions to the limitations of inexpensive consumer electronics. Self-production methods were common and liberated music from corporations but also meant that an abundance of recorded material never saw the light of day. The group Chance, for example, crept out of a ghostly closet only once to release their arresting “Samba do Morro” before being locked away again. Lost to forgotten archives, the shapeless sigh of “Intro-Amazônia” feels like an emission from a faraway planet of secrets and shadows.

A recurring theme in mainstream Brazilian press has been the influence of foreign music on national culture. Brazil has always been protective of its musical heritage and, despite national music consistently outselling international pop since the 1970s, major newspapers have reported endlessly on the troubling cultural invasion of foreign music. A new wave of journalism that did not see the relationship with the outside as one of subjugation emerged in the mid 1980s. Many musicians, like Thomas Pappon of Voluntários da Pátria, doubled up as countercultural writers for opinionated publications like Bizz. Along with the arrival of MTV in Brazil in 1990, Bizz provided a valuable cultural link with the increasingly globalized world. It offered a more nuanced take on the dialogue with the outside that reflected the appeal that foreignness held for readers who found inspiration equally in Talking Heads, Hermeto Pascoal, and Karlheinz Stockhausen.

There is a palpable sense of exploration, discovery, and pleasure running through the music in this compilation. A whole world of sounds can be heard tentatively opening up, as well as surprising languages in its songs. Edson Natale’s translucent “Nina Maika” shimmers unexpectedly with the soul of a traditional Bosnian folk song. Natale was introduced to this by Mitar Subotić, a Yugoslavian producer who had relocated to Brazil after falling in love with the country on a UNESCO scholarship. Subotić – or Suba as he became known – had recorded the song previously under his pseudonym Rex Ilusivii and collaborated with Natale on his album, bringing out a magical sonic ambiance in his playing. Suba’s introduction of this unlikely song into the Brazilian songbook takes on symbolic meaning: it marks a new phase in MPB, in which the search for new meaning is concomitant with the unsettling of the ground on which stable notions of Brazilian identity were perched. Indeed, nowhere is the opening to new ideas observed more clearly than in the collaborations with Suba.

Suba’s arrival in São Paulo in 1990 marked a turning point in Brazilian electronic music. Suba was a seasoned producer who brought with him an unprecedented technical sophistication and a unique sensibility. He offered an uninhibited vision of Brazilian music that was not limited by cultural constraints and helped definitively unleash the ideas that São Paulo’s musical community was collectively opening up to. In 1994, Ekatarina Velika’s frontman Milan Mladenović joined Suba in São Paulo to revive a project they had started in Yugoslavia. They enlisted Suba’s closest Brazilian collaborators, including Trio Mocotó’s percussionist João Parahyba, to form Angel’s Breath. The sublime atmospheric arrangement of “Velvet” is born from Suba’s singular ability to make connections. It is music that signifies the desire to break out of isolation and become part of the world.

Suba helped update popular Brazilian music. His subtle electronic reworkings of styles like bossa nova would eventually propel Brazilian music into a phase of unprecedented global popularity. The appeal of Brazilian electronica – epitomized by the biggest selling Brazilian release of all time, Bebel Gilberto’s Suba-produced Tanto Tempo – was the result of an outsider’s thrilling vision of Brazil being absorbed into its soul. Edson Natale’s dedicated his song “Perseguindo o Por do Sol” to Suba, capturing the essence of his imagination in his continual chasing of the Brazilian sunset. This pursuit was tragically interrupted when Suba’s studio caught fire in 1999, taking with it years of recordings as well as his young life.

In “Gersal” the percussionist Júlio Pimentel records himself pounding sesame seeds together with salt in a large pestle and mortar known as a pilão. Like the pilão, this compilation brings together music that has been twisted out of different genetic codes. Individually, tracks offer unpredictable reinventions of Brazilian popular music, and yet each contains the lingering traces of all others. When viewed from one angle, the music remains a recognizable collage of sub-tropical pleasures, a mirror of its times. But viewed from another, it possesses an alien sheen, the sense of an exuberant newness that apprehends how things could be other than how they are. Instead of seeing ends, Outro Tempo sees horizons; broad swathes of worlds that shade off into the distance and finish somewhere that is still out of view.

Music From Memory The Netherlands

Next to our Bandcamp we also run a webstore where you will find merch + all our vinyl/CD/Tape:

Bandcamp Daily  your guide to the world of Bandcamp